For a variety of practical reasons, the energy sources for exothermic chemical reactions (flame and catalytic) have been generally limited to fuels that liquefy under moderate pressures while operating in a narrow range of ambient temperatures. These include propane, n-butane, and iso-butane. Fuels that are not stored in the liquid phase suffer from very low volumetric energy density (i.e. stored energy per unit volume of fuel).

Because portable heat generating applications benefit from having a lightweight fuel container, the fuels or fuel mixtures (n-butane, isobutane, propane) used in practice are chosen such that the saturation vapor pressures (liquefying pressure) fall within a DOT (Department of Transportation) specified range.

Coolfire® technology has been carefully designed to take advantage of a very special fuel source known as DME. To understand what makes DME so special and the very best choice for a liquid phase fuel canister requires a more careful look at the details.

A bit of chemistry may be necessary to explain. Basically, to have a reaction where something successfully burns, you need three components: fuel, heat, and O2.  Fuel is supplied by the canister. An ignition source starts the process and then heat is released by the reaction.  Oxygen is usually supplied by the environment. An open flame like a candle is a good example of this.

Air is made up of lots of gases, but the one we are interested in is Oxygen.  The percentage of oxygen in the open air is approximately 21%.  But at altitude, while the percentage doesn’t change, the amount of O2 decreases significantly.  About 2/3 of the amount of O2 that is available at sea level is available at 10,000 feet.  Different fuels require different amounts of O2 to burn.  For example, for the gas fuels that that are currently sold in small, lightweight canister format are:

We have successfully devised methods to completely and efficiently combust these common fuels (n-butane, iso-butane, propane). However, the results have shown us that there is such a huge advantage to DME, that use of any other fuel would result in a more complex system design, which in turn substantially increases product cost.

Stoves don’t work as well at altitude, as it is considerably harder to find enough O2 to make them burn efficiently.  But “flame combustion” stoves don’t burn that efficiently in the first place.  There have been considerable discussion and testing of stoves in the last 10 years concerning their inability to burn fuel completely, resulting in unacceptable amounts of CO, and unburned fuel.

Tests done by Roger Caffins, published in BackPacking Light, showed that the average backpacking stove produced about 250 ppm of CO during operation. It is true, that a few of the stoves tested better under very specific operating conditions (20ppm). Nevertheless, some medical literature has suggested long term low level exposure is potentially harmful to the user.. It is worth noting that two of the most popular stoves tested, were actually far worse.

These tests were done at sea level.  IF the tests were done at altitude, the results would be worse still.  The sampling method used placed the stove into a specially constructed box intended to simulate a particular environment. Our results were obtained by direct sampling at the stove exhaust outlets which results in a more sensitive indicator. Testing thus, the rates we obtained on such open flame stoves were more than double what Roger found.

CNW does not consider these rates to be acceptable. Coolfire® technology is NOT open-flame burning. It is our aim to burn a fuel cleanly and completely, both for health reasons and because complete burning is obviously more efficient.

All open flame devices use an orifice-driven Venturi device to supply the majority of the air to the combustion. They are rated according to their ability to entrain air with the fuel gas. It turns out that one of the parameters that has a major effect on the entrainment ratio is the flow resistance (i.e. pressure drop) that occurs downstream of the Venturi.

To completely burn the fuel gas from canisters currently being sold (Butane or butane/propane mix), the venturi device must have an entrainment ratio of at least 31. Unfortunately, most stove burner pressure drops are such as to make it difficult to achieve this ratio, resulting in incomplete combustion. Even if the 31/1 ratio could be achieved at sea level, it would fall short at higher altitudes.

While theoretically possible to make a venturi that might reach 30/1, the evidence shows that current burner designs must rely on extra air that is supplied from the outside air surrounding the burner flame (secondary air). Because secondary air does not always mix thoroughly with the primary fuel/air stream, the results are often incomplete combustion products.

Using pure propane would improve the situation (i.e. 25/1 ratio) but other factors can still interfere with the combustion process. For instance, it is common to see soot forming on the bottom of pots, which is a good indicator of incomplete burning. Additionally, pure propane is rarely used in portable devices because its higher vapor pressure requires a stronger walled and much heavier cartridge.

For Natural gas, it would be quite good.  No additional air would be needed.  However, Natural gas is not practical in a canister format as the pressure required to obtain reasonable energy densities (i.e. liquefying the gas) would result in very thick walls.

DME, it turns out, is a great candidate, as it does not require additional O2 beyond what is easily produced by a Venturi.

Coolfire® technology is NOT open flame technology.  There IS NO flame.  The combustion process is totally internal and completely encloses the catalytic process.  NO secondary air is required with DME.  If we use isobutane as a fuel with our technology, boost air must be provided using a more expensive Coolfire® design. Consistent long-term testing of Coolfire® technology has shown that our devices burn extremely efficiently and that the amount of unburned fuel and CO is undetectable using 1ppm resolution measurement tools.

Coolfire® catalytic heating technology is designed to take maximum advantage of a unique, renewable form of fuel gas (DME).It can be sourced as a second-generation biofuel and is considered to be carbon neutral. It also has the lowest greenhouse gas contribution of any biomass-based fuel and the highest “well-to-wheel” energy efficiency. It functions much better in cold conditions than other canister fuels and because it is oxygenated, it maintains complete combustion over a wide range of altitudes. Thus DME is the fuel that is indisputably best for catalytic devices. Cartridge fillers are also very familiar with DME. 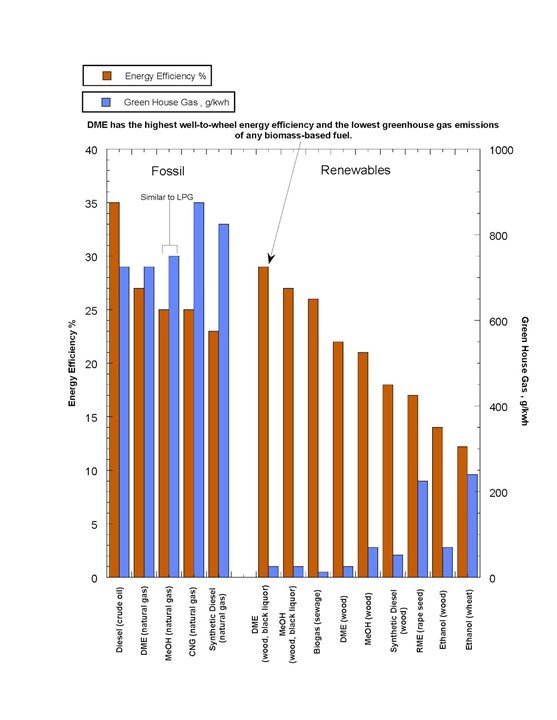