Can you imagine a place where you’d like a hot beverage but can’t usually get it?

Catalytic heating, in a variety of forms, has been utilized for some time. Until now, the lack of innovation in this technology has prevented it from reaching its full potential. In fact, the conventional approach to catalytic heating has many of the same issues as flame-based heating.

Coolfire® catalytic heating technology is an innovative and patented new approach to catalytic heating that provides substantial advantages over current, flame-based portable heating. Although it was developed primarily to address portable beverage and food heating applications, its capabilities can be expanded to include other product categories.

For a variety of practical reasons, the energy sources for endothermic chemical reactions (flame and catalytic) have been generally limited to fuels that liquefy under moderate pressures while operating in a narrow range of ambient temperatures. These include propane, n-butane, and iso-butane. Fuels that are not stored in the liquid phase suffer from very low volumetric energy density (i.e. stored energy per unit volume of fuel). Because, portable heat generating applications benefit from having a lightweight fuel container, the fuels (or fuel mixtures) used in practice are chosen such that the saturation vapor pressures (liquefying pressure) fall within a DOT (Department of Transportation) specified range.  Coolfire® catalytic heating technology is designed to take maximum advantage of a unique, renewable form of fuel gas (DME) that has the lowest greenhouse gas contribution of any biomass-based fuel and the highest “well-to-wheel” energy efficiency.

By comparison, portable electrical resistance heating products have lagged far behind combustion-based heating technologies (both flame and catalytic), primarily because they are severely hampered by the very low energy density of batteries (compared to chemical energy storage). Lithium-based batteries are generally used for these applications and bring a host of performance-limiting issues (self-discharge, weight, max power delivery, cost, etc.).  Because of this, portable electric heating products have been relegated to a very small part of the market place and are unable to meet many of the basic user requirements demanded of the larger market.

In order for heat to be generated by a flame-based process, the fuel molecules and oxygen molecules in the air must collide with sufficient kinetic energy (molecular speed) to overcome an energy barrier that normally keeps the molecules from reacting (i.e. exothermic reaction product) and releasing heat. The high energy barrier requires a high flame temperature (> 1000°C) to sustain the reaction, as well as, to start it (match, spark, etc.)

Coolfire® technology employs a catalyst within the reaction zone to produce a flame-free, low temperature ( < 260°C) heat reaction. The basic principle of operation is that the catalyst lowers the energy barrier between the fuel molecules and the oxygen molecules so that they may combine at a much lower temperature. The catalyst is not consumed in the reaction. Instead, it acts as a kind of “broker” to insure that the molecules combine at a much lower temperature than normally be required. It then proceeds to perform this function in a continuous manner as new, unreacted fuel and oxygen, enter the reaction zone. Although catalytic heating is not a new concept, the Coolfire® approach is a unique and patented method of optimizing catalytic heating for a wide variety of portable heating applications including beverage and food heating applications. In stark contrast, conventional catalytic heating has many of the same problems and limitations as flame-based heating.

The kinetic energy required to start the reaction is generally supplied in the form of a high energy mechanism (match, spark, etc) or process of some sort to produce a temperature above the autoignition point. Automated starting of flame-based products depend on spark based mechanisms. Portable products, that utilize a spark starting approach, universally depend on a manually switched piezoelectric component. Piezoelectric starters are prone to damage and tend to have high failure rates, are cumbersome to operate (high starting force manually applied ), and relatively noisy.  Once started, the heat power is controlled by manually adjusting a flow valve (e.g. needle valve).

When a high-temperature flame contacts a much cooler cooking utensil surface, an unsteady boundary layer is formed at the surface. The gases within the boundary layer transfer their heat energy to the cooking utensil causing some of the fuel/air mixture within this layer to drop below a critical temperature. This can prevent some of the fuel/air mixture constituents within the flame from completing combustion. Consequently, incomplete combustion products often form which include the toxic emission of carbon monoxide.

Coolfire® technology does not require a flame or spark to start the reaction. Instead, a micro-miniature, electrically driven (joule heating) resistance coil is embedded within the catalytic media and raises the local temperature to a point (well below the autoignition point) where the reaction begins. The reaction then spreads rapidly throughout the reaction chamber, allowing completion of the heat-generating fuel/air reaction without noxious by-products (i.e. no CO or NOx ). Unlike portable open flame products, the starting process for Coolfire® catalytic technology is completely automated, noise-free, and requires a very low energy draw ( 0.5 W-sec)  per start. Heat power is controlled by built-in sensors and a set of microcontroller algorithms.

Naked flames can only be sustained by a careful balance between flame propagation speed (which is determined by fuel type and fuel/air ratios) and the rate at which the raw fuel/air feed enters the reaction zone. Because of the need to balance these and other parameters within a narrow range of settings, flames may be thought of as essentially borderline stable. This tendency toward instability (i.e. flame out condition) also makes them susceptible to being extinguished by wind currents that interrupt this balancing act.

In addition, flame-based products have other restraints, such as being sensitive to the physical orientation of the product (i.e. the flame is always vertical), so it is necessary to provide (a reasonable degree) of product leveling to ensure proper heat transfer and optimum performance. Another limiting factor for flame-based products is that fuel/air mixtures must be within a relatively narrow operating range. If the mixture is too lean or too rich, flame ignition becomes unreliable

Coolfire® catalytic technology avoids most of the limitations of flame-based heat sources. The reaction cannot be extinguished by wind effects and is not susceptible to flame lift-off or flash-back effects. Moreover, our patented catalytically driven combustion technique runs at a temperature below the ignition point of most materials encountered in daily life. In addition, it operates over a very wide range of fuel/air ratios not achievable with flame combustion.  It is also not dependent on product orientation, which makes it safe and convenient to operate while walking, hiking, or traveling in a vehicle.  Because of this and other properties, Coolfire® accommodates a much wider design space resulting in more desirable product attributes.

Because of their high temperature, (typically above 1000 °C) and the lack of a flame isolating envelope, flame-based portable heaters present a serious fire hazard if knocked over or placed too close to flammable material.  The lack of a flame isolating envelope also contributes to safety issues during the starting process. For instance, inexperienced or inattentive users, who inadvertently let the unignited fuel/air mixture build up too much before manually igniting the flame, may see a sudden and unexpected back flash that propagates out of the air vents, exposing the user to potential harm.

The high temperatures common in flame-based heating tends to cause a high degree of local turbulence as a result of flame zone buoyancy. The turbulence can adversely affect heat transfer, limiting overall efficiency.

Coolfire® catalytic technology produces a reaction that runs at an average temperature of about 260°C, which is well below flame-based heat sources.  The Coolfire® catalytic heat-generating technology is completely enclosed within a porous, open cell, metal foam structure. The resulting effect is that the boundary layer at the cooking utensil surface is laminar. This allows a more uniform heat transfer to occur which increases overall efficiency and eliminates local hot spots.

In addition, the metal foam, in which the catalytic reaction is maintained, has geometric properties that cause it to behave as a flame arrestor, further limiting the potential for any kind of flame formation or propagation.

DME has the highest well-to-wheel energy efficiency, 25% better than synthetic diesel fuel, and the lowest greenhouse gas emissions of any biomass-based fuel. 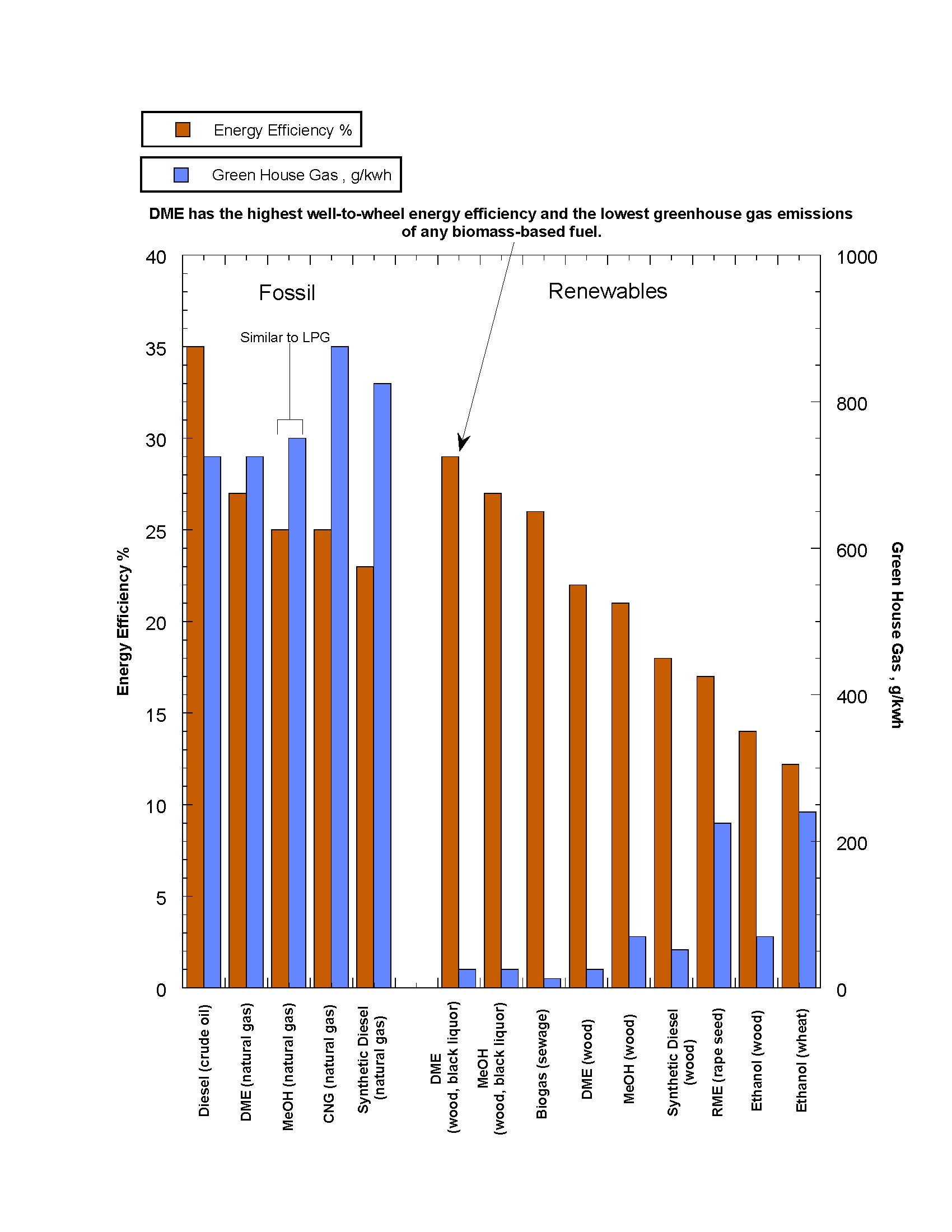 Production of DME from pulpwood is under development in the US by Oberon Co.